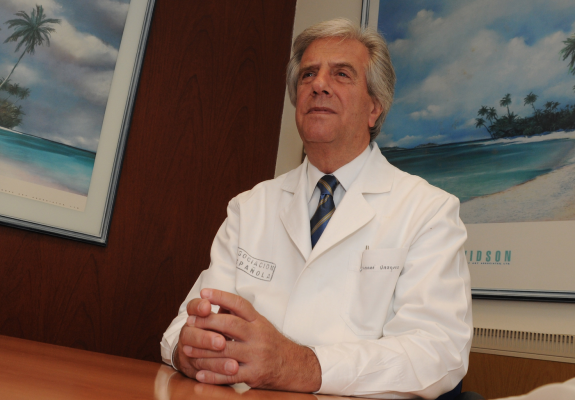 We are deeply saddened by the passing of the former President of the Oriental Republic of Uruguay, Dr. Tabaré Vázquez.  The Global Center for Good Governance in Tobacco Control (GGTC) community would like to express our deep admiration and gratitude to a great human being and an exceptional global leader who leaves an invaluable mark on tobacco control and public health.

On November 17th, he honored us with his participation through a message during the virtual launch of the Latin America Tobacco Industry Interference Index. His opening words were, “It can be done” referencing Uruguay’s fight against tobacco through the implementation of effective tobacco control legislations, and the arbitration with Philip Morris International (PMI) that Uruguay won before the arbitral tribunal of the International Centre for Settlement of Investment Disputes (ICSID). In his message he emphasized that “progress can be made” in successful public health policies and called for strengthening political and social engagement against this pandemic, which kills about eight million people a year globally.

Apart from having political vision and courage, he knew how to collaborate with civil society. He recognized its invaluable contribution to strengthening the implementation of the WHO Framework Convention on Tobacco Control policies and the fight against tobacco industry interference.

Dr. Tabaré Vázquez was a clear example that a political commitment to achieving the significant progress that Uruguay consolidated in public health is essential. His leadership changed the history of Uruguayans and marked a milestone in tobacco control and the broader fight against noncommunicable diseases at the regional and international levels.

His legacy commits us to work to further advance the fight for public health.

On behalf of GGTC, we express our most heartfelt condolences and convey our respect to the Uruguayan people, their government and to his family.

May he rest in peace.