The Davos stage was not the first prestige event in Switzerland to which PMI has recently attached its name. In October 2019, a senior PMI representative also appeared alongside United Nations and OECD representatives at a roundtable discussion in Geneva, co-sponsored by the International Chamber of Conference.

Blair’s appearance on the Davos stage of the PMI-supported panel event, “Confronting Global Challenges, Solidarity in an era of retreat,” was unannounced due to security reasons.

However, a Twitter post by another panellist, Alexander Stubb, vice president of the European Investment Bank captured the moment – with the PMI logo clearly visible on the background banner.

Blair did a one-on-one interview with moderator, Irene Mia, Global Editorial Director of The Economist Intelligence Unit, before stepping down, and other members of the panel, including PMI Chief Executive André Calantzopoulos, joined the stage. 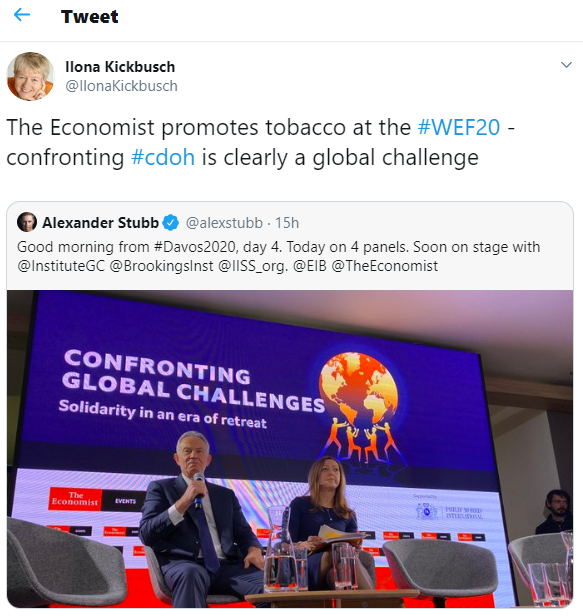 While Blair’s appearance at the PMI-supported forum largely slipped under the radar, it did not go by entirely unnoticed by participants at the 2020 Davos meeting.

Just prior to the event, Adrian Monck, of the WEF managing board, called on the The Economist to cancel the collaboration with the tobacco industry.

“We don’t allow nicotine-peddling death cults to join the World Economic Forum, but they skulk around the edges of our meeting looking for reputation laundering opportunities” said Monck in a Linkedin post.  “I really hope The Economist reconsiders its decision to host a side event at Davos with big tobacco.”

The New York Times, picked up Monck’s comment, but buried it in a sensational news story about the alleged Saudi hacking of the cell phone of Amazon’s Jeff Bezos.

The PMI-supported panel focused on how: international cooperation traditionally faciliated by international organizations is being “undermined” by isolationist trends.

“The paradigm that defines today’s new world order is a Catch 22. As countries turn inwards, the problems they face are increasingly global in nature,” stated the online event description.

“Their inability to foster collaboration is threatening significant progress on pressing issues like climate change. The need for a supranational organization has never been greater. Yet even on a domestic level, the disaccord that characterizes today’s politics is preventative. What hope then of navigating these uncharted waters?

That choice of topic was ironic, insiders observed, in light of the tobacco industry’s position vis a vis international agreements such as the WHO Framework Convention on Tobacco Control – one of the few health-focused conventions of the UN system.

This is not the first such forum where PMI has popped up recently on the Swiss scene, either.

Last October, PMI Vice President Luisa Moreira featured in the line-up of the 5th Geneva Business Dialogue Roundtable, co-sponsored by the Geneva-based International Chamber of Commerce. The topic was “Regulatory Policy in a Changing World.”

Appearing alongside PMI’s Moreira was Organisation of Economic Development and Co-Operation (OECD) representative, Miguel Amaral and Teresa Moreira, a senior official at the UN Conference on Trade and Development (UNCTAD).

UNCTAD featured the roundtable on its website as did the ICC. Other panelists included: Jean Yves Art, Microsoft senior director and Marcela Bliffield, a senior legal counsel at Nestlé.  The roundtable was held in a rented room of the Geneva Graduate Institute – although it was a private event and not sponsored by the academic centre.

Switzerland has long been a field of subtle, but simmering battle between the countervailing forces of global health and global tobacco. Geneva is home both to the World Health Organization, which birthed the Framework Convention on Tobacco Control in 2003, and the global headquarters of Japan Tobacco International. PMI maintains a significant presence in nearby Lausanne, as well as Neuchatel and Zurich.

While WHO and tobacco advocates have been vigilant about distancing the UN system from collaborations with the tobacco industry – the dyke is not without its cracks.

Last June, Michael Møller, departing Director General of the UN Office at Geneva (UNOG), called for a more “nuanced relationship” between the tobacco industry and the UN system in a memo penned to UN Secretary General Antonio Guterres. His remarks, later publicized, raised a chorus of opposition.

In July, a group of leading civil society tobacco control advocates published an open letter to the UN Secretary General, saying that Møller’s call for “nuance” not only threatens progress on the Sustainable Development Goals, such as reducing deaths from tobacco-caused diseases but also: “stands in direct conflict with international law, in particular Article 5.3 of the World Health Organisation Framework Convention on Tobacco Control (FCTC), which states that: ‘Parties shall act to protect these [FCTC] policies from commercial and other vested interests of the tobacco industry.’”

“It is impossible to produce, market and sell tobacco products in a way that is compatible with public health or the UN’s 2030 Agenda,” the letter further noted. “Accordingly, tobacco companies have been excluded from the UN Global Compact.”  The letter also noted that a UN Economic and Social Council (ECOSCO) resolution “calls upon all UN agencies to implement their own policies on preventing tobacco industry interference.”

The appeal, signed by the Framework Convention Alliance, The Union, and other tobacco control groups, concluded saying: “It is alarming that an outgoing UN official of Mr. Møller’s status would feel the need to suggest softening the stance of the global community toward an industry whose products claim 8 million lives, and cost between one and two percent of global GDP annually.”