To the Distinguished Delegates of the Seventy-third World Health Assembly:

On behalf of civil societies working in tobacco control, we express our highest regard for your commitment and solidarity in addressing global health governance during a tremendously difficult time. We welcome the WHA draft resolution as it brings us all to a common understanding of how we shall emerge from the pandemic.

We are, however, concerned that the draft resolution failed to address the serious challenges posed by the tobacco industry during the crisis.

We believe that strengthening implementation of the WHO Framework Convention on Tobacco Control (WHO FCTC), a treaty that aims to address the tobacco epidemic to reduce the global toll of 8 million tobacco-related deaths and USD 1.4 trillion in economic costs annually, should play a key role in the COVID-19 response.

Tobacco use is a major risk factor for a range of non-communicable diseases (NCDs), which in turn are high risk for developing severe and even fatal COVID-19. However, the tobacco industry has played a role in health messages that sow confusion — depriving smokers of the opportunity to quit outright. It is also branding itself as part of the solution and maximizing visibility of its donations while seeking trade and tax privileges. With these tactics, the tobacco industry has successfully masked the fact that its products cause USD $460 billion in health care costs annually, and obscured the potential for tobacco-sourced financing to be tapped for health and development.

In a recent statement, the WHO FCTC Secretariat noted that “there has never been a more appropriate time to support citizens in their efforts to quit tobacco use” and warned that “We can expect the tobacco industry to follow its usual game plan by claiming it provided significant support to governments during the pandemic, but then pressuring or interfering with the efforts of those same governments to strengthen tobacco control.”

To ensure that we find ourselves in a healthy and sustainable world after this public health crisis, governments must promote policy coherence in their COVID-19 responses and strengthen implementation of the WHO FCTC. To this end, we call on the WHA to urge Member States to take WHO FCTC implementation into account in COVID-19 responses and pandemic preparedness plans; and to request the WHO Director General to integrate the WHO FCTC in its work on improving pandemic preparedness as well as to include tobacco industry interference in efforts to counter misinformation.

We look forward to supporting you in this endeavor. You may reach us through Ms. Bungon Ritthiphakdee (bungon@ggtc.world), Executive Director of the Global Center for Good Governance in Tobacco Control (GGTC), a partner in STOP (Stopping Tobacco Organizations and Products). 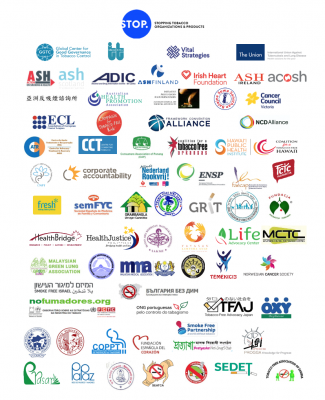 [i] UN General Assembly resolution 70/1, Transforming our world: the 2030 Agenda for Sustainable Development, A/RES/70/1 (21 October 2015), available from https://www.un.org/ga/search/view_doc.asp?symbol=A/RES/70/1&Lang=E – “Target 3.A Strengthen the implementation of the World Health Organization Framework Convention on Tobacco Control in all countries, as appropriate.”

[ii] World Health Organization (2005). WHO Framework Convention on Tobacco Control. Retrieved from https://www.who.int/tobacco/framework/fctc_en.pdf?ua=1 – “WHO FCTC Art 5.3  3. In setting and implementing their public health policies with respect to tobacco control, Parties shall act to protect these policies from commercial and other vested interests of the tobacco industry in accordance with national law…Art 13. 2. Each Party shall, in accordance with its constitution or constitutional principles, undertake a comprehensive ban of all tobacco advertising, promotion and sponsorship. This shall include, subject to the legal environment and technical means available to that Party, a comprehensive ban on cross border advertising, promotion and sponsorship originating from its territory”; World Health Organization (2008). Guidelines for implementation of Article 12 of the WHO Framework Convention on Tobacco Control (Tobacco advertising, promotion and sponsorship). Retrieved from https://www.who.int/fctc/guidelines/article_13.pdf?ua=1 – “WHO FCTC Art 13 Guidelines: 25. It is increasingly common for tobacco companies to seek to portray themselves as good corporate citizens by making contributions to deserving causes or by otherwise promoting “socially responsible” elements of their business practices. 26. Some tobacco companies make financial or in-kind contributions to organizations, such as community, health, welfare or environmental organizations, either directly or through other entities. Such contributions fall within the definition of tobacco sponsorship in Article 1(g) of the Convention and should be prohibited as part of a comprehensive ban, because the aim, effect or likely effect of such a contribution is to promote a tobacco product or tobacco use either directly or indirectly…Recommendation The Parties should ban contributions from tobacco companies to any other entity for “socially responsible causes”, as this is a form of sponsorship. Publicity given to “socially responsible” business practices of the tobacco industry should be banned, as it constitutes advertising and promotion.”

[iii] United Nations, General Assembly, Political Declaration of the High-level Meeting of the General Assembly on the Prevention and Control of Non-communicable Diseases, A/RES/66/2 (24 January 2012). Retrieved from https://www.who.int/nmh/events/un_ncd_summit2011/political_declaration_en.pdf – “Note with appreciation the World Health Organization Framework Convention on Tobacco Control,1 reaffirm all relevant resolutions and decisions adopted by the World Health Assembly on the prevention and control of non-communicable diseases, and underline the importance for Member States to continue addressing common risk factors for non-communicable diseases through the implementation of the World Health Organization 2008–2013 Action Plan for the Global Strategy for the Prevention and Control of Non-communicable Diseases2 as well as the Global Strategy on Diet, Physical Activity and Health3 and the Global Strategy to Reduce the Harmful Use of Alcohol…38. Recognize the fundamental conflict of interest between the tobacco industry and public health;”

[iv] World Health Organization (28 May 2016). Sixty Ninth World Health Assembly: Framework of engagement with non-State actors WHA69.10. Retrieved from https://www.who.int/about/collaborations/non-state-actors/A69_R10-FENSA-en.pdf  – “44. WHO does not engage with the tobacco industry or non-State actors that work to further the interests of the tobacco industry. WHO also does not engage with the arms industry.”

[v] United nations, Economic and Social Council, United Nations Inter-Agency Task Force on the Prevention and Control of Non-communicable Disease, E/2017/L.21 (30 May 2017). Retrieved from https://www.un.org/ga/search/view_doc.asp?symbol=E/2017/L.21 – “Principles: Engagement with the tobacco industry is contrary to the United Nations system’s objectives, fundamental principles and values. The United Nations system, including the intergovernmental agencies that are observers to COP and members of the UN Inter Agency Task Force shall establish measures to limit interactions with the tobacco industry, and where interactions still occur, the recommendations of the guidelines for implementation of Article 5.3 of the Convention shall apply”